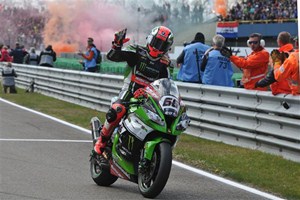 Sykes frustrated due to lack of talent

KAWASAKI rider Tom Sykes, the 2013 World Superbike Champion, is having a frustrating start to the 2015 season due to a lack of traction at the rear.

Round four at the Dutch TT Circuit in a**en saw Sykes finish fifth in both races despite clinching his first pole position of 2015.

Speaking to WorldSBK.com, the Yorkshireman explained: ‘Very disappointed. At the end of the day, Jonathan (Rea) and Chaz (Davies) did two really strong races.

‘We are getting closer to the front, but it was just frustrating to have one limitation which has cost us. It’s the same limitation that has affected us all year.’

Elaborating on the limitation, Sykes said: ‘Rear traction. We are suffering in general from the rear traction side. Of course we need to change the balance of the bike but, slowly but surely, I’m confident we can get there.

‘All we can do is to keep working. In fact, you’ve just caught me after a big technical meeting and we’ve got some good ideas. There is still light at the end of the tunnel.

‘Obviously, Jonathan has done a great job and only dropped ten points so far, so we need to react fast. At the end of the day, we can only do what we can do. There is nobody as frustrated as me.

‘Watching the guys pull away from me on rear traction… There is no replacement for traction. I’m not making excuses. I was riding the best I could. The guys in front obviously did a better job.

‘I want to join the party! Watching the race form fourth and fifth… Those guys are having a hell of a time. I want to get involved and it would be nice for the tele as well!’

Sykes has finished on the podium twice this season, at the Chang International circuit and in Aragon, both of which have been third place finishes.

The next round of the 2015 World Superbike Championship will be held in Imola, Italy, in three weeks’ time.