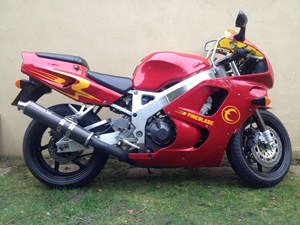 A HONDA Fireblade once owned by the world’s most famous monocle-wearing former middleweight and super middleweight world t**le holder is up for sale at Bonhams’ auction at the Stafford show on April 26, with an estimate of only £1500-£2000.

The 1995 bike has just 11,569 miles on the clock and features a unique paint scheme designed by Chris Eubank himself. It features his initials and the words “Simply the Best” – taken from the Tina Turner song that used to be played during his fight entrances.

There’s an aftermarket Renegade end can and the bike is described as in excellent condition. What do you think? Bargain or barmy? We sort of like it.

Pics will help ten-fold to sell a bike too. Filling out something like the attached (copy & paste into your add) IS MANDATORY to a**ist any potential purchasers and would also avoid repeated requests for info. that should already have been supplied by the seller……

Service History/Receipts/Recent Service work :All servicing and work logged by myself…..

Any Other Relevant Info :bike is mint,mini indicators fitted,originals are here with the bike as well as spare MRA Screen
Add is on Dung Deal….more pics there

Grew up in a Family that Drove bikes.. everyone from my grate grandad to my cousins all ride… and iv decided after a few years its time for me to join the family line…

while away recently I got a chance to ride on a Dragster 125, as soon as i sat on it feel in love with the bike… Im looking for this bike as I am starting out and getting my licence… legal Learner…

I am looking for one in good condition, running and not to expensive as in between jobs…

if it has bags or windscreen or sissy bar would be awesome…. Im looking for Black … but will consider other colours, seen red looked nice but the black is just s**y as hell…. only one important rule number Plate cant add up to 13

If anyone has one … or know where one is for sale please message below and il get back to you ASAP … iv been out to see a few that were on adverts and done deal… the 3 i went to see were rust buckets, that wernt looked after…

Carl Fogarty, who recently added the ITV ‘I’m a Celebrity Get Me Out of Here’ t**le to his TT Races and World Superbike Championship wins, will be the guest of honour in the TT VIP Club for race day on Wednesday 10th June.

Carl, the most successful World Superbike rider of all time with 59 race wins and four outright t**les in 1994, 1995, 1998 and 1999 will join Platinum Package guests at their table and will be sharing his experiences of racing around the TT Mountain Course as well as his recent exploits in the jungle.

Carl’s TT career included race wins in the ’89 750 Production Race and a Formula 1 and Senior double in 1990 and he also took part in what is widely recognised, and was voted by fans, as the greatest TT Race when he and Steve Hislop duelled over six thrilling laps in the 1992 Senior TT.

“I’m really looking forward to getting back to the Isle of Man and seeing what’s going to be a brilliant race day.  I’m still incredibly proud of my TT wins and they mean the most to me out of all of my race victories. It’s great to see the resurgence in the event and that a TT win has to be earned again and Wednesday’s packed race day looks brilliant with three races in a packed programme. The food will also be much better than I had in the jungle as well!”

Carl Fogarty meets some fans at the 2014 Classic TT

The Platinum TT VIP hospitality package will take you and your guests deeper into the famous races than ever before, with exclusive ‘access all areas’ passes putting the holder on the start line, winners’ enclosure and behind the scenes at the post race press conferences. Carl will also join you at your platinum table and personally present you with a limited edition souvenir.  Platinum Ticket holders will also experience a much-coveted closed-roads lap of the TT Course in the official course car.

Places can be purchased on an individual basis or complete tables of eight at £1000 + VAT per person.  There are only a limited number of platinum places available for Wednesday’s race day which includes the second Monster Energy Supersport Race, the SES TT Zero and the Sure Sidecar Race 2.  To reserve places visit http://www.iomtt.com where tickets can be booked on line, or alternatively contact Regency Travel on 01624 694456 or Duke Marketing on 01624 640000. 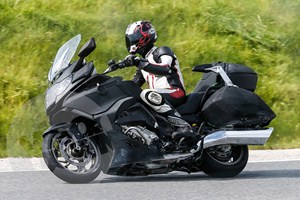 HERE’S the first clear look at the so-called bagger edition of BMW’s K1600, which now doesn’t look like a bagger at all.

We showed you the bike in a long-lens shot last year, fitted with the same new bagger-style low-slung panniers you can see on it now. At the time it was widely a**umed the top box would be removed before production, in line with the bagger formula and the recipe followed by Honda to make the F6B from the Goldwing.

That now seems less likely, since the top box is still on this near production-ready bike spotted in Germany this week. It’s also gained the pillion armrests from the K1600GTL Executive since we saw it last June.

The probable explanation is that it’s simply a new high-spec edition of the tourer given droopy panniers to create a more American-influenced shape. The aim may be to create a closer rival to the likes of Harley-Davidson’s Electra Glide for people who like that sort of thing.

The test mule has also gained more horizontal exhausts to make space for the lower panniers, along with engine protection bars and re-styled fairing and wing mirrors. It’s possible we could see some of those styling tweaks across the K1600 range for 2016.

The design could still work well with the top-box removed, just as Harley offers the bagger-style Street Glide by taking the box off the Electra Glide. Given the rate of BMW model development, we shouldn’t be surprised if that’s also planned – but it hasn’t been seen in any spy shots yet.

Anyone know this yoke or have any info?